The dialogue camps of the Peace School of Monte Sole, organized in collaboration with national and international partners, are residential workshops aimed mainly at young people between the age of 16 and 25 from different realities and contexts and take place either at the headquarters of the foundation or abroad.

This project was born in the early 2000s and is based on the meeting of 40 boys and girls from Italy, Germany, Israel, and Palestine on Monte Sole (10 participants per delegation). The main idea of the camp was and is to bring together young people from areas that are currently in conflict, where the possibility of contact between people belonging to opposing parties (such as Israelis and Palestinians, Serbs and Kosovo-Albanians) is very limited. The aim was and is to simplify the establishment of contacts between youngsters. Italians and Germans, who are not living in conflicted areas today, but whose countries have been in conflict in the past, in order to show a peaceful living together. Italy and Germany, and their citizens, through a long process of elaboration of their memories and stories on an individual and a collective level, in fact, have reached a certain level of esteem for each other and forms of reconciliation.

The 40 youngsters meet at Monte Sole as individuals, as human beings and not as representatives of their countries of origin: that’s what is extraordinary about this camp. Meeting on a personal level helps to get rid of an ethnic/national identity and to redefine in a more open-minded and complex way, which allows us to realize that we are all on the same side, human beings, with desires, aspirations, emotions, different and similar at the same time. Thus, the conflict is not only faced directly but also through the daily experiences of each and everyone, their memories, their points of view. Always on a personal level.

The activities are exclusively designed as workshops. By working in small groups of up to 4-5 people you allow an active participation of all in discussions and the productions of creative thoughts. An effort towards creative cooperation is an indispensable tool for a real confrontation and an actual settlement between different opinions and points of views within a working group. The request to produce something practical and creative (a performance, a song, a poster etc…) inevitably creates a cooperative effort, which leads to a result. The difficulty this effort bares is very instructional and brings the understanding of the particular difficulties and fascination of working together.

Another key idea behind the planning of the camps is one of the memories and their revision. That’s why, the day which is dedicated to the consciousness of the memory of Monte Sole and the historical context in which memory is inserted, is a key aspect in every camp. It allows you to initiate a reflection of individual memories, personal responsibility, the mechanisms of violence, the necessity of memory and oblivion. Through reflections in workshops, the discussions about the memories of Monte Sole become an opportunity to speak about these conflicts nowadays, especially under consideration of personal painful memories which can be dealt with by sharing within the group, but also by speaking at length about the situations in their countries of origin.

In the magazine “The Public Historian” (University of California Press) was an article published in 2008 about the project “Peace in 4 voices”.  click here 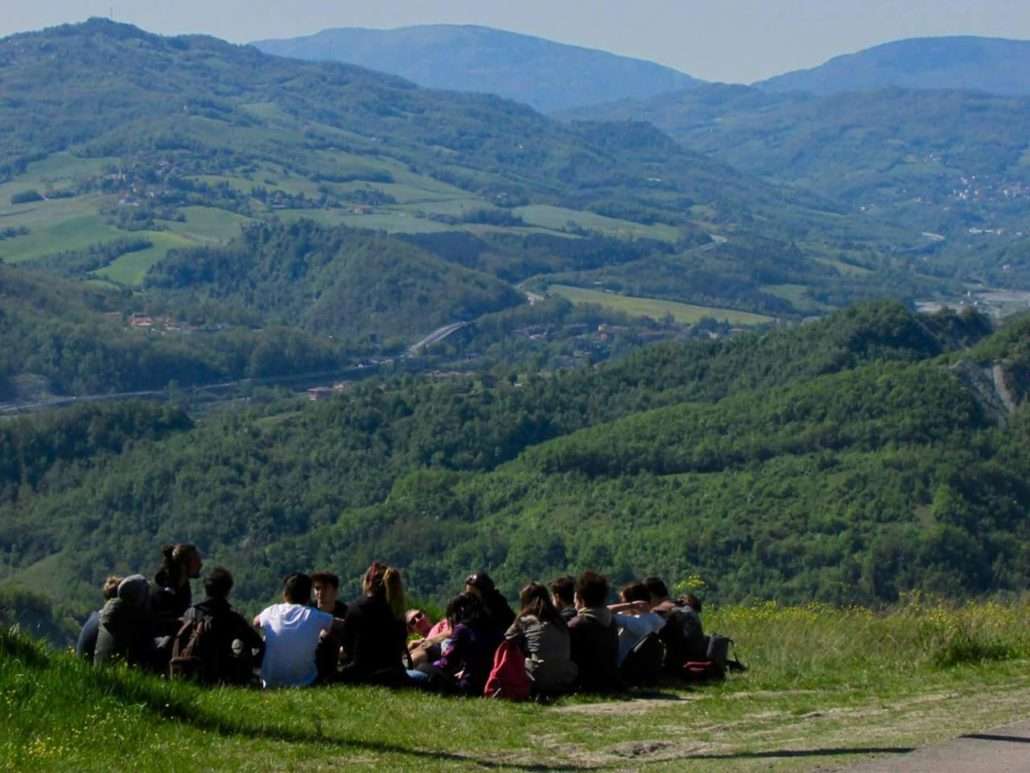 The experience of the camps, born with the project “Pace a 4 Voci” and has expanded considerably over the past 5 years. Developing along the lines of work on European citizenship and it has also been opened for participants from different countries from all over the European Union and countries from the Balkan area.

This camp takes place in Heppenheim, in the German region of Hessen, with the participation of boys and girls from different EU and bordering countries to discuss human rights and European policies. Each year a different and current theme is developed with respect to the challenges posed by active and councils citizenship. To find out more about all the topics dealt with, please visit the dedicated website.

This project is promoted by the organization “Haus am Maiberg” with the participation of the Scuola di Pace since 2002, and made possible by the support of the Hessian government.

Memory and history are starting points for reflection on the mechanisms of violence and war and on individual responsibility; this reflection is necessary for the construction of a culture of peace, civil coexistence and solidarity, in which everyone feels called to play an active role. The camps with European partners start with the visits of the sites of the Monte Sole massacre and an in-depth workshop of the above-mentioned topics, to then continue with the analysis of the national post-conflict experiences of democratic elaboration. Through the analysis of the historical context and the debate, that led to the construction and the production of the national democratic constitutions and through the analysis of the fundamental principles of the constitutional treaties, the aim is to create a space for a critical reflection on the concrete implementation and updating of these principles, of the limits and resources of our coexistence. The different experiences become clearer when thoughts are shared, and through the confrontation with day to day life they show, the inconsistencies and the possibility for change to participate in. All in all, the camp can be seen as a creative workshop, that requires all participants to make an effort for in intellectual elaboration, to believe in the project and the “here and now” they believe in. The methodology of the camps includes the workshops to be in small mixed groups with reflections all together at the end. An essential part of the educational project is the support and the simplification of the coexistence and the creation of a small community.

The historical knowledge of the processes, events, and protagonists of 1944 serves, also in this camp, as a stimulus for a profound reflection on the mechanisms that led to those events.

The idea is to offer a suitable space and time for comparing the many different concepts and definitions related to the idea of the European Union, often seen as a distant and bureaucratic entity. The idea is therefore also to offer the possibility to young people from different cultural and political backgrounds to confront each other on stereotypes and prejudices so often reproduced and strengthened, developing the awareness of their irrationality and a possibility of change. Article 2 of the European Constitution itself states that the Union is founded on the values of respect for human dignity, freedom, democracy, equality, the rule of law and respect for human rights, including the rights of people belonging to a minority. These values are common to the member states in a society characterised by pluralism, non-discrimination, tolerance, justice, solidarity, and equality between women and men. What many young people have in common, however, is the perception of extreme remoteness and powerlessness in respect to institutions that, instead of being perceived as an expression of shared choices, seem to be restrained bureaucratic machineries of power. Moreover, this perception is not only transversal to national belonging but also to the social background of young people: it is not possible to fully perceive how the European aspect influences daily life. So here’s the question: Can this be discussed? What are the origins, what is the path, what is the very nature of this thing called Europe? How can we be present? How to be, in essence, protagonists of our present and our future? These thoughts are accompanied by a great feeling of bewilderment and fear that is continually fed by politics and the mass media, feelings that lead to not opening oneself up to the outside world but rather to close oneself off as rich towards the other and the “different”. Which is almost an implosion of the very concept of Europe. So instead of immediately addressing the institutional profiles of the EU, a programme will developed that is preparatory to the concept of citizenship, participation, and openness to “the other”.